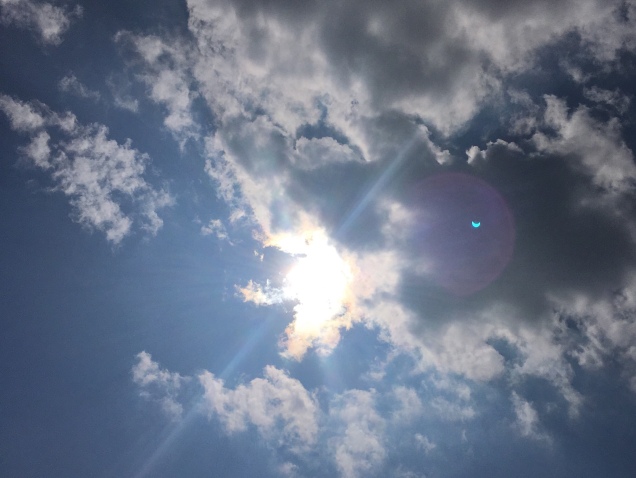 The library was out of free glasses. Every store for miles was sold out. I moped around with no desire to look at shadows. The clouds rolled in.

I looked away and lined and used my sunglasses to shield my phone camera lens.

Some how the combination captured a reflection of the partial solar eclipse. You can see the crescent in the darkest part of the cloud.

With a little imagination, we can do anything. 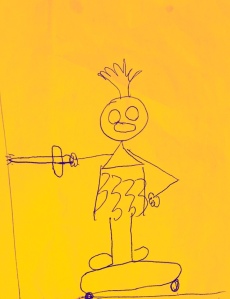 Puréed politics is as unpalatable as over-cooked carrots spun through the food processor.

Talking heads in 1950s suits telling us what to think is so retro (and not in a good way like that mid-century modern you’ve been eying).

If your words are sharp, short and fire rapidly, think for a moment: have you heard this before, in exactly this way. If you have you know you have been memified.

Let everyone know, our brains are not empty waiting to be filled with their memes that crowd out original thought. Imagination needs the space that the memes take up. So throw them away like moldy cheese.

We have been playing it too safe. Think of your worst ideas.

The worse the better.

For brilliance rises not in the safety of acceptable ideas that carry no risk. Brilliance bursts into life from outrageous ill conceived unconventional thoughtS.

Failed ideas are the food of the precious few.

You cannot fail if you open a void

I wore the uniform to hide the differences: the half smile.

I mastered the language to hide the difference: small talk and ask a lot of questions.

For years I navigated in and out looking like I was never touched by fear or sorrow.

Always surrounded by others and always alone.

And then I looked deeply. An accident perhaps. Two conformists side by side on a train. The lights flickered strangely and dimmed, a moment of uncertainty and shelter in the brief darkness. I looked at my right hand , clenched in the ring that stopped me from falling.

I briefly brushed another hand.

I followed the white knuckled hand to an arm, then to the shoulders, then the neck and then the face of a stranger.

I really looked and he looked back, both unguarded.

It lasted but a moment but the impact lingered. The suited stranger was not fearless or untouchable.

For the next few days, I experimented. I walked through public places seeking strangers eyes. I would lift my mask briefly and a relief would spread across their face. Unguarded eyes would look back before continuing on.

A million private joys and pains showed though in micro expressions.

Each moment is a new beginning.

Abandon “should be” thoughts.

Trust in your power.

Here is your opportunity for growth.

Their gods needed a sacrifice for the women had become two bold. The audacity! With hashtags #MeToo #TimesUp and #withher feminists were stirring up trouble.

The #maga oracle had predicated that there was a new battle for our civilization. These anti-patriarch feminists were going to set civilization back ten thousand years. The oracle swigged the ancient scotch, the vessels swelled and his visage glowed blood red. He roared a battle cry. “The gods INSIST.” He bellowed.

He whispered to the king. “But Hillary.” 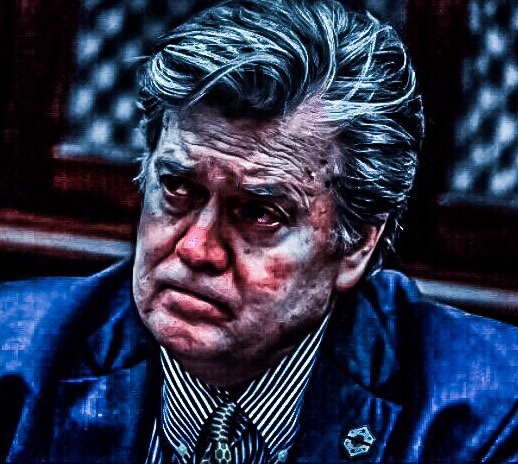 The oracle’s image flickered blue in the homes of the faithful. They rose from their recliners and gathered in the new Public square.

The CEOs wore their power suits and flashed their extra cash around. The ministers carried their holy books and read passages written by the sacred early misogynists that promise hell fire for the disobedient. Members of the NRA paraded in camouflage carrying their rapid fire armaments. College boys bore tiki torches, their khaki legs marching in lock step while they chanted “lock her up, lock her up”

“Hang the treasonous bitch” a lone voice called. The mob was filled with bloodlust and the chanting climbed louder.

“Not the flesh.” The oracle cried. “Not the flesh. We do not need a martyr to fan the feminist fires!” But his voice slurred and few could make out his words.

The crowd parted for the #maga sisterhood. They flowed past their men in their ceremonial stilettos. They smiled through painted lips. They were hungrier than the men for they had to demonstrate their loyalty. They carried the pantsuited effigy to the foot of the king’s golden throne.

“Her emails” they chanted.

Then the maga sisters tore the effigy to shreds before dousing it with lighter fluid. The most bleached moved her arms in rhythm to the chants. She flashed her sparklers like pom-pom’s and then tossed it onto the effigy.

A roaring fire rose and brought a feverish blush to the apples of her cheeks.

“So hot.” The king mumbled then tweeted.

Inspired by Bannon’s comments about anti-patriarchy, trump’s obsession with Hillary and the daily prompt: insist.

Too much makes us feel like we do not have enough.

All these things not quite right, or worse,

hiding the treasures we already possess.

Inspired by the desire to jump off the consumer bandwagon and today’s daily post.

How can you blame them?

Their mamas lied to them.

Their wives lied to them.

The elders let their boyhood selves stand on soapboxes while their sisters clapped.

“Sit with the men. The girls will handle dinner.” The mamas said.

The papas grinned. “You are a chip off the old block.”

It’s anatomy and all that!

Who could blame the old men now?

Inspired by gender bias in politics and the daily post, bewildered